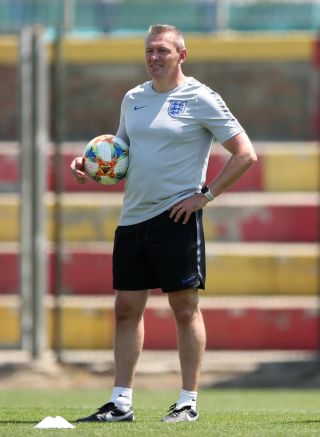 The Young Lions face France in Cesena on Tuesday in their Group C opener in Italy.

England also play Romania in Cesena on Friday and Croatia in San Marino next Monday in a tricky group with just the winners guaranteed a semi-final spot.

The best runners-up will book a place in the last four but Boothroyd knows their first game against fellow favourites France – who include Lyon’s Moussa Dembele – is key.

He said: “It is knockout football from day one. You don’t get the luxury of having a game to just assess things whether you win, lose or draw and then have the next game to accumulate some points.

“Whereas with this you are at it from the start. You know teams are going to need to attack to win the groups or claim the best runners-up spot. How does that change what we do?

“It doesn’t really because we look to play and win every single game. That’s what we’ve talked about. It isn’t going to be as easy as just saying that but we are looking to win the game.”

Jake Clarke-Salter has been named as the Young Lions’ skipper having captained them during some qualifying game and also leading the Under-19s.

The Chelsea defender wants to emulate John Terry after taking an international armband as well.

He said: “I’m a Chelsea player so John Terry is one of my idols and I look up to him a lot.

“With young players as well I came through the academy and he would help me a lot and give me advice and that was one of the main factors for me personally.”

Boothroyd named the 21-year-old as his captain on Monday and believes Clarke-Salter is the perfect choice.

He added: “I have known Jake a long time and I think besides being a very good footballer and very, very brave; one of his biggest and best characteristics is his humility. As you point out, there are a lot of big hitters, a lot of big personalities.

“But Jake is a doer and he has the respect of the staff and the players. They all look up to him and when he speaks they listen.

“It is rare these days that you get a young player who talks as much – although you wouldn’t think it listening to him now.

“He is a great talker on the pitch which I think is a very important skill to have.”