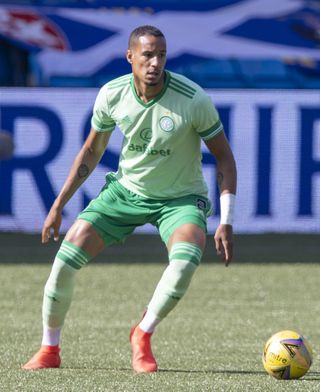 Former Celtic captain Alan Stubbs feels Neil Lennon will need a more physical centre-back option to meet some of the challenges posed in the Scottish Premiership.

Christopher Jullien endured an uncomfortable afternoon against Kilmarnock’s Nicke Kabamba on Sunday, giving away the penalty that earned the home team a 1-1 Rugby Park draw.

The imposing Frenchman last year admitted he was too “nervous” when facing Livingston and admitted their forwards had given him a “wake-up call”. Livi striker Lyndon Dykes later branded him “timid”.

Former Everton central defender Stubbs said: “I don’t think it’s ideal when you come out and say you don’t like the physical side of it, coming up against that different type of player. And it’s happened on a few occasions now, at Livingston last year he got ruffled up a little bit by Dykes and looked uncomfortable.

“But I have got to say on other occasions he looked a really classy centre-back.

“I think that’s why it’s important you have maybe got a different type of centre-back, so when you are coming up against a team who are going to use the physical side of the game, that you have a different option Neil can call upon.

“I think he’s more of a player who likes to read the game, play with his brain, rather than get in someone’s face and get really tight.

“Some centre-backs now, especially modern-day ones, they don’t like that contact and I think potentially there’s en element of that in Christopher Jullien’s make-up.”

Jullien and Ajer were Lennon’s preferred centre-back pairing last season and Jozo Simunovic has since been released.

Midfielder Nir Bitton and right-back Hatem Abd Elhamed have played in central defence, mainly a back three, while 20-year-old Stephen Welsh is the only natural centre-back available.

“The two of them are the mainstays, there is no surprise they are number one and two but there is nobody pushing them from behind and with Simunovic leaving they are a little bit light in that area,” Stubbs said. “I’d be very surprised if there are no new recruits in those positions.

“I think the reason why they probably haven’t done anything right now is the right targets haven’t become available otherwise Neil wouldn’t have gone into such an important season with just those two mainstays.”

:: Alan Stubbs was speaking at the launch of Premier Sports’ live and exclusive coverage of the Betfred Cup and Celtic’s first three European qualifiers.