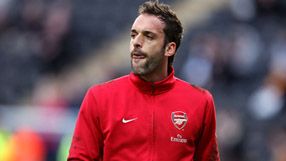 Almunia, who has made 175 appearances for Arsenal since joining in 2004, had fallen behind Polish keepers Wojciech Szczesny and Lukasz Fabianski in the pecking order.

The 34-year-old Spaniard, whose seven years at Arsenal have combined moments of brilliance with occasional blunders, joined West Ham after first-choice keeper Robert Green was ruled out for around six weeks with a knee injury.

"It's a big 'Thank you' again to [Arsenal manager] Arsene Wenger and Arsenal for allowing us to get such a high-class and experienced goalkeeper to come in and fill-in for Robert for the time being," West Ham manager Sam Allardyce said on the East London club's website.

"We hope that the huge amount of experience he has had at Arsenal and the football he has played on a regular basis will stand us in good stead here at West Ham and more and more clean sheets will come from his presence in goal."

Almunia is set to make his West Ham debut against Crystal Palace on Saturday.