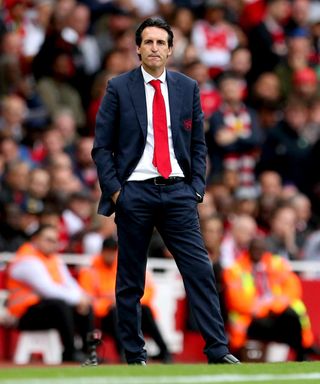 Unai Emery hailed the “amazing” character of his Arsenal side as their 10 men battled from being a goal down twice to beat Aston Villa.

Pierre-Emerick Aubameyang’s seventh goal in seven games this season was enough to earn the Gunners a thrilling 3-2 win at the Emirates Stadium.

John McGinn had given Villa a surprise lead but, despite Ainsley Maitland-Niles’ sending off late in the first half, club-record signing Nicolas Pepe equalised from the penalty spot.

Villa stunned the home crowd once more as they regained their lead just 89 seconds later when Wesley turned home, only for Calum Chambers to hit his first Arsenal goal since August 2016. Aubameyang provided the winning moment to take Emery’s side into the Premier League’s top four.

“We want to feel with our supporters something special, to connect with them. Today the character was amazing,” he said.

“Playing with one less player, not easy. We lost some control but we took some risks to come back. We are creating good spirit with our supporters and the players are feeling that.

“Our commitment, our behaviour, fighting each ball, taking some risks. That is good. That character, that connection with our supporters, that spirit. We can be happy, I think.”

A slightly sour note for Arsenal was the reaction of the home fans to Granit Xhaka’s substitution, with ironic cheers greeting the captain’s departure.

Xhaka has proved a divisive figure at the club, but Emery was full of praise for the Switzerland midfielder.

“Today I changed him because he played 90 minutes on Thursday. I preferred a fresh player. But for me he is a very important player for us.

“He has a big commitment here. I am sure he is going to achieve the best things. We are professional. He is an experienced player.

“He knows sometimes we are criticised. We need to be mature and continue working. I am going to support him. He’s a good player.”

Villa boss Dean Smith was left frustrated that his side failed to control the tempo of the game once they had a man advantage.

“We lost our fearlessness but for some reason we retracted second half and put us under pressure. We scored again and had a good five-minute spell but retracted again.

“The players lost a bit of belief and that is what disappointed me the most. You look at the goals we conceded and they are sloppy.”