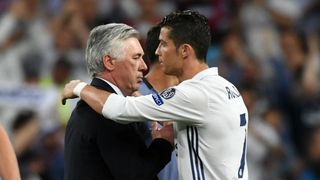 Cristiano Ronaldo's arrival at Juventus is a positive for all Italian football not just the Bianconeri, says his former Real Madrid boss Carlo Ancelotti.

Juve announced a €100million deal to bring the Portugal superstar from Madrid on Tuesday in a major coup for the club and Serie A.

Ancelotti knows first hand what Ronaldo brings to the table having been in charge for Madrid's 2013-14 Champions League success – the first of four for Los Blancos in a five-season period.

The Italian will have to call on his knowledge to stop Ronaldo next season as he begins the latest chapter in his storied coaching career with Napoli, but Ancelotti warned that there are more threats than just Juve, who he coached between 1999 and 2001, next term.

"Cristiano Ronaldo is absolutely world class and a consummate professional," he told a news conference.

"His arrival to play in Serie A is good for Italian football, not just for Juventus. He will motivate us to work even harder.

"Juventus will be the team to beat, but not the only one."

: " is absolutely world-class and a consummate professional. Him coming to play in is good for Italian football as a whole, not just . Plus it will motivate us to work even harder"July 11, 2018

Ancelotti is back in management after being sacked by Bayern Munich in September and he is excited to return to Italy.

"I'm proud that [president Aurelio] De Laurentiis wanted me as coach," he added.

"I was keen to come back to Italy and I admire this club - that's why I opted for this exciting new adventure at Napoli."