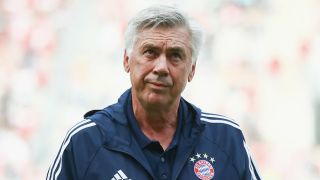 Bayern Munich coach Carlo Ancelotti cited his side's lack of intensity after they threw away a two-goal lead to draw 2-2 with Wolfsburg at the Allianz Arena on Friday.

Bayern raced into a half-time lead thanks to goals from Robert Lewandowski and Rafinha, who unwittingly deflected in Arjen Robben's already goal-bound shot.

The reigning Bundesliga champions were nothing like their fluent best and were made to pay for their sluggishness in the second half as efforts from Maximilian Arnold and Daniel Didavi earned Wolfsburg an unlikely point.

Arnold's goal came courtesy of a terrible mistake from replacement goalkeeper Sven Ulreich, but Ancelotti was quick to point out that whole team should take responsibility for the dropped points.

"We did not play as we wanted," he said. "We were slow, without intensity and not compact enough.

"We did not have the game under control as usual, so the game went like this. Sven made a mistake, but the result is that we did not play well as a team."

The game marked Wolfsburg's second under the guidance of Martin Schmidt following the sacking of Andries Jonker this week.

And the new man explained that the stirring second-half comeback was thanks to the values instilled in the team by Jonker.

Schmidt said: "If you are down to Bayern 2-0 and have a point at the end, you can drive home contentedly.

"The point, the performance, the passion and the mentality, which we showed in the second half, belong to my predecessor, Andries Jonker."