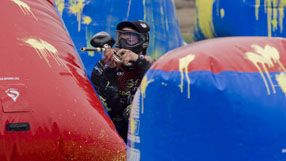 "They are idiots," Gennady Solovyov told local media after a group of fans in camouflage arrived at the club's base in the town of Novogorsk, just north of Moscow, and fired a barrage of paintballs at players and staff.

"I have no other words to describe those who could do such things. I promise I'll do my best to try to find and punish those responsible for these actions," said Solovyov, a retired KGB general.

"I was hit in the back of the head when they shot at us. Lots of players were also hit," Dynamo midfielder Alan Gatagov was quoted as saying by local media.

"I just can't find the right words. What are we supposed to do now? Should each of us hire a personal bodyguard?"

"We are certain it was a planned and organised action," the club said on their website.

Friday's shooting was the latest in a series of protests by Dynamo fans, dissatisfied with the club's dismal results this season.

Last month, several dozen supporters arrived at the club's training ground to have what they called a "frank chat" with the players about "their poor attitude".

Dynamo, the country's oldest football club who have never been relegated, were bottom of the league after losing seven of eight games at the start of the season.

However, they have moved up to 13th after hiring former Romania and Chelsea defender Dan Petrescu as coach in August.