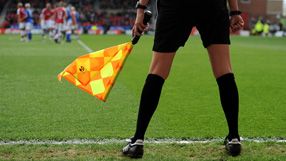 The Greek Football Federation's appeals body announced the decision after prosecutor Panagiotis Karras had said the Super League's original ruling was too lenient.

The April 8 match was stopped by the referee in the 42nd minute when lineswoman Chrysoula Kourobilia was hit in the stomach by a bottle thrown from the home fans with the visitors leading 1-0.

Kourobilia was not seriously injured but could not continue.

As well as being docked three points, Aris received a 40,000 euro-fine and have been ordered to play one match behind closed doors. A 3-0 win was awarded to Asteras.

The club had initially received a one-match stadium ban and a 55,000-euro fine by the league's disciplinary committee who had also ruled that the match should not have been stopped and should continue from the moment it was halted.

Panathinaikos were docked five points and ordered to play four games behind closed doors - later reduced to three on appeal - as punishment for crowd violence in the derby match against Olympiakos Piraeus last month.

It was the stiffest penalty ever imposed by the Greek Super League and meant Olympiakos won the title.