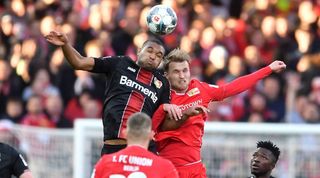 Christian Falk, head of football at the German newspaper, claims that Arsenal are keen on the 24-year-old - who has a £33.3m release clause written into his contract.

The Metro adds that the clause expires in June ahead of the European Championships - where Leverkusen's Tah is expected to be included in the Germany squad.

Head coach Mikel Arteta has made strengthening his defence a priority this summer due to injuries and a lack of form from his current players.

Rob Holding is yet to return to full fitness following a long-term knee problem, while Calum Chambers still faces another seven months of rehabilitation following his own knee injury.

Neither David Luiz or Shkodran Mustafi have fully convinced with their own performances.

Only Chelsea and Everton in the top half of the Premier League table have conceded more than Arsenal's 34 goals so far this season, although they have kept back-to-back clean sheets against Burnley and Newcastle United.

RB Leipzig's David Upamecano is also interesting the North London side. Upamecano is available for around £41.6m and is considering his options.

"There are several clubs that want me," the 21-year-old said.

"I will speak with my agents and my parents at the end of the season and we will make the right decision."