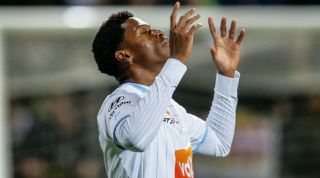 David is enjoying a prolific season with Gent, scoring 19 goals and providing 10 assists so far.

The Canadian international attacker has caught the eye of a host of European clubs, according to Jeunes Footeux.

Lyon are believed to have targeted David in the winter transfer window and have kept tabs on the player since.

But now Lyon have been joined by various top clubs from around the continent in their pursuit of the 20-year-old.

From the Premier League, Everton, Leicester City and Arsenal are all said to be interested in signing David.

They are joined by high-flying German outfit RB Leipzig, as well as Italian duo Napoli and Lazio.

Although he is valued at €20m, the sheer level of interest in David is thought to be enough to drive the price up.

La Gantoise are understood to be looking to sell while their prized asset's stock is so high.

Arsenal could be looking to replace Mesut Özil, who has been linked with amove away from the Emirates in recent windows.

Meanwhile, Leicester could be equally hungry to fill a gap next summer - in the shape of James Maddison, who has been linked to Manchester United.

However, RB Leipzig are also thought to be strong contenders considering their reputation of operating a youth-orientated policy.