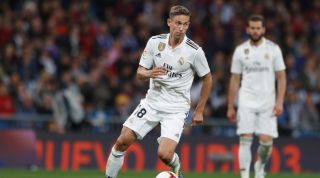 The midfielder is set for a Bernabeu departure after struggling to gain regular game time in the Spanish capital.

According to AS, Llorente has proposals from Manchester United and Arsenal and would favour a move to England.

However, Atletico Madrid are also understood to be interested if they lose Rodrigo to Manchester City, as well as Sevilla.

Llorente, who has a contract until 2021 with Real, has made just six appearances in La Liga all season and coach Zinedine Zidane has publicly admitted the 24-year-old “needs more first-team minutes”.