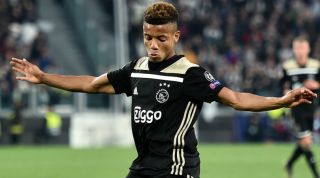 According to the Mail, the race for Neres is hotting up and Arsenal are contemplating a bid.

The scouts watched on as Neres, 22, helped Ajax defeat Juventus on a historic night.

Ajax left-back Nicolas Tagliafico has also been linked with a move to Arsenal, and has already admitted that he would like a move to the Premier League.

Neres is also thought to prefer a move to England over anywhere else.

But Arsenal aren't the only ones sniffing around the Brazilian winger - Manchester United and Liverpool have also registered interest.

Ole Gunnar Solskjaer is keen to add attacking flair to his United side, while Liverpool need more numbers out wide to compete with their deadly front three.

A £37.5 million bid from China in January offered an indicator of Neres's price tag, but Ajax's continued success may be pushing it even higher.

Quiz! Can you name the 49 players with 4+ goals/assists in the Champions League this season?

Why England's shiny, self-aware new Golden Generation have everyone over a barrel – and we should love them for it