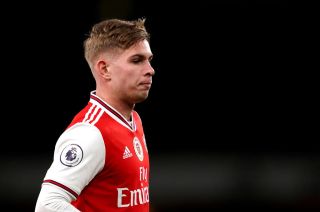 Huddersfield have announced the signing of midfielder Emile Smith Rowe on loan from Arsenal.

Smith Rowe, 19, who has made a total of 15 first-team appearances for the Gunners, will stay at the John Smith’s Stadium for the rest of the season.

Huddersfield boss Danny Cowley said: “We’re delighted to complete the loan move to bring Emile to the club as it’s the culmination of an ongoing process that began in early November.

“(Assistant boss) Nicky (Cowley) and I spent a week at Arsenal in the summer and Emile is a player that we know well.

“We’ve got some good relationships with the club and we’re very appreciative of them loaning us one of their very best young players.

“Emile will give us the creative link that we’ve been missing. He can play in a range of attacking positions and he can speed up our play. We’re really looking forward to working with him.”

Smith Rowe, an England Under-20 international, is Cowley’s first signing since he replaced Jan Siewert in September.

The Arsenal teenager made his first-team debut for the club against Vorskla Poltava in a Europa League tie in September 2018.

He stepped off the bench in Arsenal’s home Premier League defeat to Manchester City in December and started the goalless draw at Everton six days later.