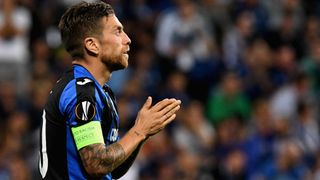 Atalanta captain Alejandro Gomez says he had been "waiting a lifetime" to star in the Europa League after his sensational goal helped secure a 3-0 victory over Everton.

The one-time Argentina international spectacularly doubled La Dea's advantage amid a barnstorming first half and was a constant menace on his competition debut.

Gomez's long-range curler even earned praise from Toffees boss Ronald Koeman, who described it as a "great goal" and a flash of "individual quality".

Andrea Masiello and Bryan Cristante scored either side of the 41st-minute strike to seal Atalanta's first European victory since 1991.

"I was very emotional because I have been waiting a lifetime for this moment," Gomez told Sky Sport Italia.

"I am not a young kid anymore so to play my first Europa League game at 29 and beat Everton is very emotional. The main thing is that the team played a devastating first half. We could have got a goal or two more in the second half, but it is all good.

"It is incredible to have the fans here. As soon as we got here, we saw how many people had come. They made it very emotional.