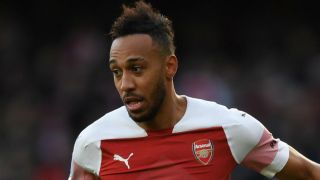 Jurgen Klopp has warned Liverpool of the qualities of Arsenal striker Pierre-Emerick Aubameyang and told his players they must be better defensively than in a 1-1 draw at Emirates Stadium in November when the teams meet at Anfield on Saturday.

Aubameyang played under Klopp at Borussia Dortmund and is the top scorer in the Premier League this season with 13.

It was strike partner Alexandre Lacazette who netted the equaliser in the last meeting between the sides and Klopp says the Gunners have an enviable strike force at their disposal.

Asked how much damage Aubameyang could cause, Klopp said: "A lot. Outstanding player, outstanding person, really funny and nice guy.

"He has the mindset of a proper goalscorer, always relaxed in front of goal. His combination of speed and finishing skills is pretty rare and makes him an exceptional player.

"He's a threat in the big space and the small space and good at heading as well. It's a nice package Arsenal bought there, and in combination with Lacazette is really difficult to deal with.

"They combine everything you could wish for with playing with two strikers. Very good combination."

Liverpool are six points clear of Tottenham at the top of the Premier League and Klopp believes his side have shown improvements since that draw in north London.

"[We need to] play much better than we did at Arsenal," he added. "Defending-wise we were not as good as we can be or as good as we have been since.

"We use the [November] game for analysis, it gave us a lot of important information. Still, it will be difficult.

"Unai Emery likes to change systems a lot, even in games two or three times. That will be pretty interesting.

"They have their own ideas as well. Arsenal against us had 62 per cent possession, and that was mainly because we didn't defend well up front. They could pass through and it was difficult to get the ball back, then we were not calm enough in our own possession.

"We had the bigger chances, but it was a very difficult game. They are good.

"Unai Emery doesn't look at the points we have and they have, he only wants to win a football game. If we take any information out of having 10 or 12 points over them, we would be really silly. The good news is the boys are not silly.

"We need to play our best football."