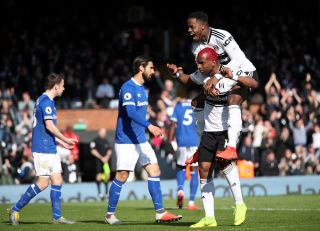 Ryan Babel has impressed for Fulham since signing a short-term deal in January but the experienced forward is disappointed his impact has not staved off relegation from the Premier League.

The Holland international scored his fourth goal for the Whites as they secured a first win since January with a well-deserved 2-0 victory over Everton at Craven Cottage on Saturday.

Babel, 32, had already laid on the opening goal for Fulham captain Tom Cairney before a cool finish from the former Liverpool man gave the already-relegated side just their fifth league win of the campaign.

While Babel, who signed a deal until the end of the season, has made his mark on the Fulham squad he could not help prevent an immediate return to the Sky Bet Championship.

“I wish my impact could have saved Fulham from relegation so that is a certain disappointment,” he told FulhamFC TV.

“For sure it has been a while how good it is to feel the winning feeling and it was amazing.

“One game is easy but to keep a consistent performance that is the difficult thing, we have a good week to prepare in training and hopefully we will be ready next week.”

That next game comes against Bournemouth as caretaker manager Scott Parker looks to add to his maiden victory in the dugout with another good showing.

While the 38-year-old was given the near-impossible task of trying to keep Fulham afloat when he replaced Claudio Ranieri in February, Babel believes he has belied his lack of experience.

“I had a feeling he had already done this for years,” he said of Parker’s approach.

“Okay, the results were maybe not there but in training sessions, the way he talks to the players, it is like he is an experienced coach.”

Everton skipper Phil Jagielka retained his place in the side having scored the winner against Arsenal last weekend after being drafted in during the warm-up.

The 36-year-old felt Fulham’s shackles were off having already been relegated and has called for a reaction from the Toffees when they host Manchester United next time out.

“They were at home and, with the relegation, I think it freed them up a little bit,” he told the club’s official website.

“We just didn’t get any momentum in the game. We didn’t have a great start to the game, and we didn’t get back.

“They came out of the blocks fast, like we were expecting. It’s a massive match for us coming up.

“We’ll dust ourselves down and look forward to the United game and hopefully put in a similar performance to our recent ones at home.”