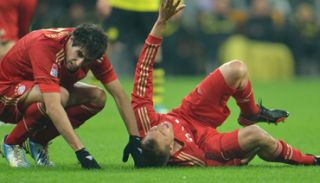 The Germany international tore the cruciate ligament in his right knee last week as he was rehabilitating from an identical injury he suffered in early December.

The latest setback means the 24-year-old faces a race against time to be fit for the 2014 World Cup in Brazil with Germany well on course to qualify.

"Holger Badstuber underwent surgery on Monday (in the United States," the club said in a statement. "Doctors estimate he will be out for 10 months. His professional career is not in danger."

Badstuber had missed more than half of the current campaign with the initial injury he sustained in a Bundesliga match against Borussia Dortmund.

Bayern, who won the Bundesliga title this season, take on Dortmund in an all-German Champions League final in London on Saturday.