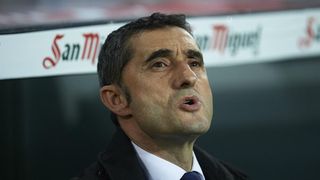 Ernesto Valverde does not believe Barcelona's current form is a cause for concern.

Barca had their LaLiga lead trimmed to five points by Real Madrid's derby win over Atletico Madrid this weekend – their subsequent goalless draw at Athletic Bilbao meaning the advantage stands at six points with 15 games remaining.

Including last week's 1-1 draw with Madrid in the first leg of their Copa del Rey semi-final, Valverde's side are without a win in three matches across all competitions.

Speaking to reporters after the game at his old San Mames stomping ground, the Blaugrana head coach suggested a dose of perspective was required.

"Well we were first last week, we're first this week and, if I'm not mistaken, we'll be leaders next week as well," he said.

"That's the situation. There are weeks when you earn a lot of points and some when you don't.

"It's a long season and we'll wait until the end to make a judgement."

Barcelona host relegation-threatened Real Valladolid next weekend before travelling to Lyon in the last 16 of the Champions League.