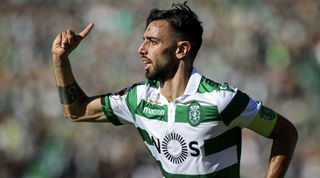 The Sporting Lisbon midfielder Fernandes has been a target for Manchester United for some time, spanning back to last summer.

United were thought to be close to signing the Portuguese midfielder but it's reported the clubs are still apart on valuation.

Now, according to Superdeporte, Barcelona could be about to leapfrog the Red Devils and sign Fernandes themselves.

The most striking element of the report is that it's claimed Fernandes could then be sent on loan to Valencia as part of a 'three-way manoeuvre'.

Barcelona have reportedly been pursuing a deal for Valencia's Rodrigo Moreno and could use Fernandes in a deal for the forward.

Rodrigo was identified as a replacement for the injured Luis Suarez, who is reported to be out of action until May.

Valencia have apparently refused other players as potential makeweights from La Blaugrana, such as Nelson Semedo.

It's believed that Barcelona are some way down the line in negotiations with Sporting and could strike a deal this week.

The 25-year-old, who scored 32 goals from midfield last season, is very highly rated within the Catalan club.

Initially, Barcelona were believed to be keen to sign Fernandes next summer but decided to bring the deal forward as it would help kill two birds with one stone.

By signing Fernandes, they would get a goalscoring midfielder for next season and a centre-forward to replace Suarez for the remainder of this campaign.

Fernandes has 15 goals and 14 assists to date this season and is valued at around €60m.

Andy Mitten column: How do Manchester United get out of this slump? Lessons from their 1970s rebuilding