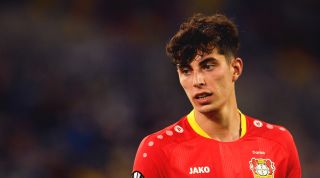 German superstar Kai Havertz has apparently agreed terms with Chelsea - now all that remains is for the west Londoners to thrash out a deal with Havertz's Bayer Leverkusen.

Leverkusen - who were knocked out of the Europa League by Inter Milan last week - are looking for £90m for their prized asset. Havertz has been in excellent form all season and at just 21 years old, he has plenty of room to grow as a player.

Chelsea, however, believe that Havertz is worth £70m. Having agreed a five-year deal for the playmaker's services, they're looking to haggle with the Bundesliga club before other sides look to join the race for Havertz.

Bayern Munich are long-time admirers of Kai Havertz, though reportedly can't justify shelling out the money for him. Real Madrid, too, would love to add the Germain to their set-up, but are concerned by his price.

Chelsea seem to have stolen a march on many of their rivals in a post-COVID landscape, spending heavily to reinforce their squad. Hakim Ziyech was announced in February, while Timo Werner joined after the Bundesliga concluded this summer.

Now, the Blues are looking to add more depth to the ranks, with Ben Chilwell still a major target at left-back. Leicester City are apparently asking for around £60m for the Englishman, but contact made with Ajax over signing Argentinian full-back Nicolas Tagliafico suggests that they could be resigned to losing Chilwell.

One of the more intriguing rumours concerning the Stamford Bridge side includes Declan Rice joining - but not as a defensive midfielder.

Having played for Chelsea at youth level, Rice left to join West Ham United - now, Frank Lampard reportedly wants to bring in the Englishman to bolster his defence as a centre-back. Rice has played in defence before, but more often features at the base of the Hammers' midfield.

Kai Havertz is similarly flexible positionally. The 21-year-old has featured in central midfield for Leverkusen, at No.10 and even as a lone striker. While his profile is similar to Mason Mount, Havertz would offer more depth in attack in a variety of formations; like Timo Werner, he's extremely good off the ball.

On the flipside to Havertz, Chelsea midfielder Conor Gallagher could be leaving Stamford Bridge. The 20-year-old spent last season on loan at Swansea City and is now a target for Newcastle United and Crystal Palace.