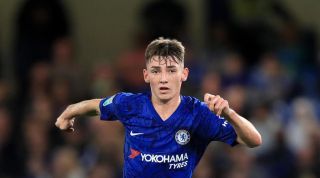 Billy Gilmour has opened up on what it was like to learn that he is now a permanent member of Chelsea's first-team squad.

The Scottish midfielder began his youth career at Rangers, before moving to west London shortly after his 16th birthday in 2017.

He made his Premier League debut in the 2-2 draw with Sheffield United last August, entering the fray as a substitute in the 84th minute.

Gilmour played the full 90 minutes in a 7-1 thrashing of Grimsby in the League Cup the following month, but has spent most of the campaign playing for the club's Under-23s.

However, Gilmour learned this week that he will be a permanent part of Frank Lampard's senior squad going forward.

And the Scotland Under-21 international says the move represents a "first big step" in his career.

"I went with the squad to Leicester and even though I wasn’t involved, the gaffer pulled me afterwards to tell me that after the winter break I’d be with the first-team permanently.

"It’s a dream come true for me. It’s the first big step I think, moving into the first team dressing room at a club like Chelsea. It’s massive for me.

"Knowing that the manager has such faith in you is massive, it gives me so much confidence when I step onto the field. It’s really good knowing that he trusts in you and likes the way you play, and I think that’s the same for everyone here.

"Age isn’t really an issue here. The gaffer has shown that if you work hard and perform well, then you will get opportunities. Hopefully I can keep pushing on and work hard every day in training."