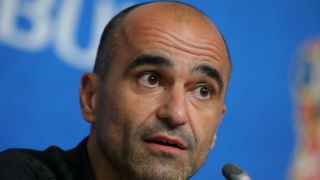 Roberto Martinez wants Belgium to go out on a high and record their best World Cup finish by beating England in Saturday's third-place play-off.

Belgium were defeated by France in their semi-final while England missed out to Croatia, both sides losing by a single goal in tight contests.

Having met in the third round of Group G, the Three Lions will be familiar opponents for Belgium, who won that match 1-0 after both sides made wholesale changes.

Martinez said a stronger Belgium line-up can be expected for Saturday's match in St Petersburg, though, with a win targeted to maintain his side's momentum.

"We want to win. When you finish the tournament, you carry the feeling of the last game and we know that, it's important to be aware," Martinez told a news conference on his 45th birthday.

"We've been working here for a month now, we arrived in Russia on June 13, it's been an incredible experience. Everyone involved in the Belgium team has performed in an incredible manner, from not just the players but everyone around the team.

"And every Belgium fan deserves a winning feeling at the end of the tournament. We're aware that England will be in the same mindset. For both footballing nations, to play seven games in a World Cup is an achievement and a successful story, but we don't want to take anything but a positive feeling out of the World Cup.

"Winning will take us a long way towards doing that."

The game has been billed in some quarters as a straight shootout for the Golden Boot between England captain Harry Kane - leading the way on six goals - and Belgium's Romelu Lukaku, who is two behind.

Martinez, though, revealed Lukaku's chance of claiming the individual award will not influence his team selection, with Thibaut Courtois set to continue in goal rather than Simon Mignolet being given his first taste of the World Cup.

"I don't think that would be a reason [behind selection]. We don't look at that sort of individual award," Martinez said. "Romelu was the first one to show that with his play and that's something of which I am very proud.

"We had a moment in the Japan game where Romelu has the ball in the box in the last second of the game and any striker who thinks he has 50 per cent chance of a goal would have taken that action - and he made one of the best assists in the tournament.

"That reflects his mindset, he's here to help the team to perform and win, not for an individual award. I think all the awards are not interesting for us, it's about finishing third and our best finish for Belgium, that would be an achievement to salute more than any individual awards.

"Our admiration to Simon is bigger than ever as it's not easy to keep his standards and make the goalkeeper who is playing challenged and reach the sort of level that Thibaut is reaching.

"For us, it's not about playing minutes or not, it's about recognising that he has a massive, massive role in the national team. In goal unfortunately you're not relying on playing five or 10 minutes, or having rotation, the goalkeeper has to have the consistency."