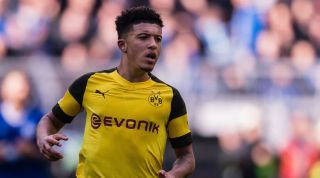 The 19-year-old has been in sparkling form for the Bundesliga club this season and Manchester United have also been linked with a summer move.

German outlet Bild reports that the Spanish giants have set their sights on Sancho as, unlike PSG forward Kylian Mbappe, he is not in the ‘unsellable’ bracket of players on the market.

However, a bid of €180 million (£155 million) would be required to prise the former Manchester City youngster away from the Bundesliga.

Dortmund sporting director Michael Zorc was unequivocal when addressing the rumours, however, telling ESPN FC: “We do not expect anything and we do not want anything, because he is on our plans.

"He will play for Borussia Dortmund next season. Nobody needs to get in touch.”

In a sensational maiden Bundesliga campaign, Sancho has scored 12 goals and provided 15 assists in 38 appearances across the Bundesliga and Champions League.