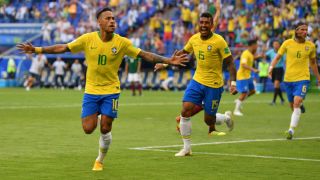 Neymar's strike and a late second from Roberto Firmino saw a strangely low-key Brazil edge past Mexico 2-0 to book a spot in the World Cup quarter-finals.

Tite's men are yet to hit full stride at Russia 2018, and on this evidence they still have more to come, but Neymar's 51st-minute goal and Firmino's tap-in after coming off the bench means the tournament favourites progressed with relative comfort in the end, and avoided the early exit that has already befallen the likes of Spain, Germany and Argentina.

Mexico were the dominant force in the opening 20 minutes in Samara, but they were unable to make their superiority count and eventually allowed their muted opponents to scrap their way into the game.

After Mexican goalkeeper Guillermo Ochoa had been called into action to deny Gabriel Jesus and Philippe Coutinho, Neymar finally made the breakthrough at the back post - netting his second goal of the tournament shortly after half-time, when Willian's scuffed cross found its way through to him.

The margin became more comfortable with two minutes left when Firmino - just on as a replacement for Coutinho - added the finishing touch after Neymar had lead a counter-attack.

The only blemish for the five-time champions was the second-half booking for Casemiro, which rules him out of the quarter-final clash against either Belgium or Japan.

Mexico, meanwhile, will look back fondly on their opening 1-0 win over Germany, but are now left to rue a seventh consecutive exit at the last-16 stage.