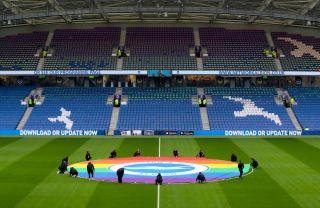 A Brighton fan has been jailed for using racist language towards Tottenham players during their Premier League match in October.

George Reynolds was sentenced to eight weeks and has also been banned for life by the club.

Brighton chief executive and deputy chairman Paul Barber said in a statement: “We welcome the verdict. There is no excuse for racism in any form, either inside a football stadium or anywhere in society.

“We have a zero-tolerance policy on racism and the individual will also be subject to a life ban from all of our fixtures, premises and events.

“We take no pleasure in imposing bans on supporters but we have made it very clear on numerous occasions that we have zero tolerance for any kind of discriminatory behaviour, and the sanctions we impose will be commensurate with what is totally unacceptable behaviour.”

Reynolds, a season-ticket holder at the Amex Stadium, was identified and ejected from the ground by club stewards.

Reynolds appeared before Brighton Magistrates’ Court on Thursday December 5, where he pleaded guilty to both offences.