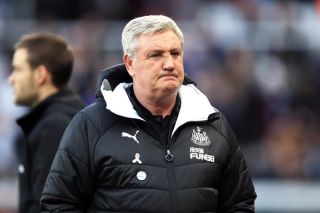 Steve Bruce has revealed Newcastle came close to matching their £40million transfer record as they launched a big-money swoop for a midfielder.

The Magpies head coach, who also confirmed he had tried, but failed, to sign Chelsea striker Olivier Giroud on loan, was thrilled when the club had a bid accepted for an unnamed player, reportedly Lille’s Boubakary Soumare, only for the man in question to turn down a switch to Tyneside.

Bruce said: “We had a bid accepted that would have nearly got us to our record transfer eight days ago, where we had it accepted by the club and unfortunately, the player wanted to stay where he was.

“We were active – we were really, really active and it didn’t quite happen. We’ll just have to wait and see what we can do in the summer.

“We were close to it (the club’s record transfer) again, but couldn’t get it over the line, which is a big disappointment to us. He was our number one target and unfortunately, we couldn’t do it.”

Bruce was not expecting further incomings on the final day of the January transfer window, although there was a chance that midfielder Ki Sung-yueng could leave.

However, having added Tottenham full-back Danny Rose to the earlier loan acquisitions of Nabil Bentaleb and Valentino Lazaro – all three are expected to be in the squad for Saturday’s Premier League clash with lowly Norwich – he was satisfied with his lot.

Asked about Rose, who joined until the end of the season on Thursday, Bruce said: “He was playing for England in a World Cup qualifier in September and playing in the European Cup final a few months before that, so we’re delighted to get him.

“He’s a top player, the kid, and is arguably as good a left-back as there is in England.”

Rose arrived on Tyneside with speculation over a Saudi takeover, which broke last weekend, rumbling on.

However, Bruce insisted he had been told nothing is imminent on that front.

Asked what managing director Lee Charnley, his conduit to owner Mike Ashley, had said to him this week, he replied: “If there was something to talk about and something to tell me, he’ll tell me. I have a relationship with him that I think he would.

“At the moment all he’s said, there’s nothing in it. Okay, fine, let’s go to work and let’s see where we are.”