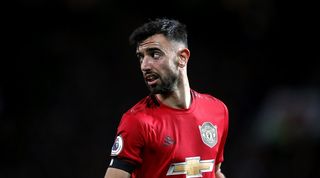 The Portugal international moved from Sporting CP to Old Trafford last week in a deal worth an initial £46.5m.

Fernandes made his debut in Saturday's 0-0 draw with Wolves, a result which keeps United within six points of the top four.

And the midfielder has now revealed that two of his compatriots, Ronaldo and Nani, had only positive things to say about the Red Devils.

"Yes, I talked about Manchester United with Cristiano,” he told the club's official website.

“He just said good things about United. He said he started living his dream here and he started being a really good player here. I think he is happy with my transfer.

“I also talked with Ole [Gunnar Solskjaer] and he said he asked Cristiano about me. And he said good things about me, which is good!

“Cristiano plays with me in the national team and he knows me, and for me he’s a good person. I want to follow his steps.”

Nani, who played alongside Fernandes at Sporting as well as for the Portugal national team, also influenced Fernandes' switch.

“I played with him, he was my captain at Sporting and I learnt some things from him,” he added. “He sent me a message the other day and said he was very happy for me with my move.”

And when asked if he wanted to deliver a message to the club's supporters about their new signing, Nani stated that he believes Fernandes will be a success at Old Trafford.

“I ask you guys to give him your good support, have a little bit of passion for his adaptation, for sure he will prove his quality and score beautiful goals,” the winger said.