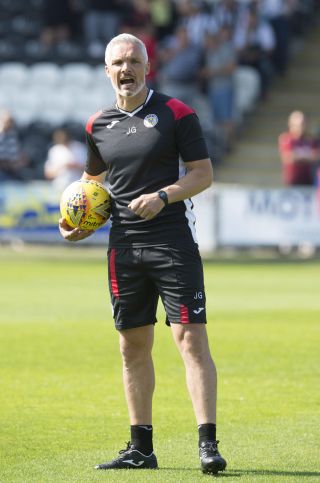 St Mirren manager Jim Goodwin revealed he was left frustrated by Hamilton’s time-wasting tactics in a goalless draw at the Simple Digital Arena.

Accies were reduced to 10 men after George Oakley was sent off early in the second half and they seemed content to earn a point on the road.

That left Goodwin annoyed as his players failed to break down a Hamilton defence who mopped up every ball into the box.

The Irishman said: “That was as frustrating an afternoon as I can remember. Hamilton came with a game plan to obviously frustrate us and every time the ball went out of play it took an age to come back in.

“Going down to 10 men probably suited Hamilton because it gave them all the more reason to drop deeper and deeper.

“From the first minute Owain Fon Williams was taking half a minute to get the ball back in to play. It didn’t matter if they had 10 men or 11 – that was what they came here to do. They just killed the momentum of the game.

“From a fan’s point of view it must be very frustrating as you come to see a game and you just can’t get the ball in play. If we both set up to play like that it wouldn’t be a classic.

“But we as a team have to find a way of breaking them down. It was wave after wave of attack but we had 15 attempts but only two on target and that’s the problem.”

Goodwin admitted referee David Munro was right not to give his team a penalty after Junior Morias fell to the ground in the first half.

He added: “I’ve watched it back. There’s a coming-together on the 18-yard line and that knocks Junior off balance but I don’t think it was a penalty.”

Hamilton boss Brian Rice was frustrated with the decision to send off Oakley for a foul on Sean McLoughlin.

He said: “I have had a boy sent off for jumping into someone with no malice or intent. I will need to phone the referee’s supervisor to ask what the new rules are.

“There is no point of me phoning (SFA referees supervisor) John Fleming as it would be a waste of my time.”