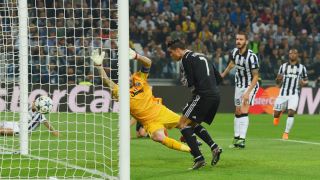 When Juventus and Real Madrid battle it out for Champions League glory in Cardiff on Saturday, two all-time greats are likely to play a key role in the outcome.

Gianluigi Buffon has been Juventus' number one goalkeeper since 2001 and is widely regarded as one of the game's true greats.

But facing him this weekend will be Cristiano Ronaldo – Madrid's undisputed star player and the Champions League's all-time leading goalscorer.

The two have met on four previous occasions in Europe's elite club competition and Ronaldo has every reason to be confident heading into their latest encounter.

The Portugal international has netted an impressive five goals past Buffon from 13 shots in total – a 38.5 per cent conversion rate.

What is most extraordinary, however, is that Ronaldo's five goals have come from a mere six shots on target, meaning Buffon has saved just one effort.

How do their overall Champions League figures measure up, though?

Here we look at how the illustrious duo have fared on the biggest stage throughout their careers.

Buffon's clean-sheet record puts him level with Petr Cech in third on the all-time list of Champions League goalkeepers, with Iker Casillas topping the charts on 54 ahead of Edwin van der Sar on 50.

It is interesting to note that this season has been the 39-year-old's best in terms of clean sheets, the veteran proving unbeatable in eight of his 11 outings. That's an improvement on his previous best of seven in 2004-05.

Only Corentin Tolisso, Nicolas Pareja and Kylian Mbappe managed to find a way past the Juve legend in this year's competition.

Ronaldo is the competition's all-time leading goalscorer with 103 strikes from 139 appearances, holding a nine-goal lead over second-placed Lionel Messi, with Raul completing the podium on 71 goals.

After a difficult start to Madrid's European campaign this term, the prolific attacker has still managed to find the net on 10 occasions in 12 outings. Having scored just twice in Madrid's first eight European fixtures this season, Ronaldo then sprung to life in the quarter-finals. He scored five against Bayern Munich to fire the titleholders into the semi-finals, where he again led the way with a hat-trick in the 3-0 first-leg win over Atletico Madrid.

Read what had to say about the Champions League final in an interview with UEFA. May 27, 2017

There is more to his game than just goals, though, with Ronaldo contributing 33 assists throughout his Champions League career – the former Manchester United man involved in a goal every 89 minutes.

Ronaldo will be looking to build on that impressive record in the final and it would not be the first time he has made a big impact when it matters most, as one of only 10 players to have scored twice in the Champions League final.

Another in Cardiff would put him in a league of his own.