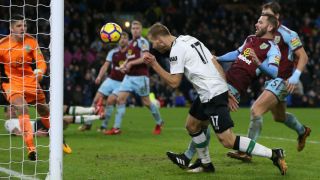 Ragnar Klavan proved Liverpool's saviour as his stoppage-time header capped a dramatic finale to secure a 2-1 win at Burnley on Monday.

The Reds were shorn of two members of their 'fab four' at a sodden Turf Moor, with Philippe Coutinho and Mohamed Salah missing while Roberto Firmino started on the bench as Jurgen Klopp sought to manage his resources amid a hectic festive schedule.

Coutinho's absence sparked further speculation surrounding his potential move to Barcelona although Klopp insisted the Brazilian had been ruled out with a thigh injury.

Salah, who scored twice in Saturday's 2-1 win over Leicester City to take his Premier League tally to 17, was missing with a groin problem although Liverpool described both his and Coutinho's ailments as "minor" with the Reds due to welcome fierce rivals Everton to Anfield in the FA Cup third round on Friday.

Sadio Mane's stunning finish just past the hour put Liverpool ahead but it looked as though Burnley had secured a share of the spoils when Johann Gudmundsson stooped to head in at the far post in the 87th minute.

But in the fourth minute of time added on, Dejan Lovren headed back across goal and Klavan raced in to nod home from practically on the goalline and ensure Liverpool were not left to rue their key absentees.

Trent Alexander-Arnold celebrated his first Premier League goal on Boxing Day but his mistake almost proved costly in the ninth minute here as Scott Arfield took up possession and slipped in Ashley Barnes, who blazed wide.

Alex Oxlade-Chamberlain stung the palms of Nick Pope soon afterwards and only a superb last-ditch tackle from Adam Lallana - making his first start of the season - prevented Gudmundsson running clear on goal in an entertaining opening.

Simon Mignolet saved comfortably from Arfield's glancing header after Liverpool were again guilty of giving the ball away and the Canada international went agonisingly close in placing his effort narrowly wide of the left-hand post in the 38th minute.

Liverpool improved markedly after the interval and forged ahead in the 61st minute as Alexander-Arnold's cross deflected into the path of Mane, who turned and rifled an unstoppable drive into the top-left corner from the edge of the box.

Pope was at full stretch to keep Alexander-Arnold's rasping 25-yard effort out of the top-right corner as Liverpool turned the screw and forced a succession of corners.

Barnes volleyed narrowly wide as Burnley sought to turn the tide before Oxlade-Chamberlain almost wrapped it up for the visitors, superbly denied at his near post by Pope.

Sam Vokes' header was well kept out by Mignolet diving low to his right but the substitute had more joy three minutes from normal time, glancing towards the back post for Gudmundsson to convert.

But just when it appeared both sides would kick off 2018 with a battling point apiece, Lovren got his head to Oxlade-Chamberlain's free-kick and Klavan stole in ahead of Phil Bardsley to send the visiting fans behind the goal into raptures.