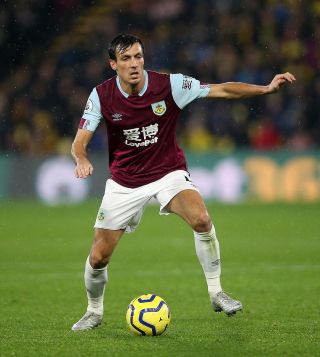 Burnley’s players proved a point in their FA Cup victory over Peterborough, according to midfielder Jack Cork.

Cork was one of just three players retained from the 2-1 defeat by Aston Villa on Wednesday, Burnley’s third loss in a row in the Premier League.

Manager Sean Dyche had been hugely critical of his side’s first-half display, claiming the Clarets were waiting for the game to turn their way instead of trying to make it happen.

The response was a 4-2 victory over League One Posh, with three goals coming in the opening 23 minutes.

Cork said: “We’ve had a tough run of games, three defeats on the bounce, so to come into this game and put a good performance in was really important.

“To start the way we did and get some good goals, worked from open play, was good to get the confidence going, especially for the lads who haven’t played much recently. Just to get a win really makes you feel much better about it all.”

Burnley went ahead in the eighth minute through Jay Rodriguez, with Erik Pieters and Jeff Hendrick adding to the lead before Ivan Toney pulled one back before half-time.

Peterborough briefly threatened a comeback but Rodriguez’s second all but sealed victory before Ricky-Jade Jones grabbed a second for Peterborough.

“Everyone had a point to prove,” said Cork. “Not only had we lost a few games recently but the lads who hadn’t played wanted to show they are ready to step in and take their chance. And everyone who played today did that really.

“It was against a League One team but Peterborough have some very good players, dangerous players. We had watched clips of them and we deserved the win in the end. A couple of mistakes let them get their goals but we were the better team I felt.”

A boost in confidence was much needed for Burnley, who face Chelsea, Leicester, Manchester United and Arsenal in their next four Premier League games.

Cork added: “We’ve got a tough month coming up but we’ve got a good record at Chelsea, Leicester at home and Arsenal at home, who are not too far away from us.

“If you look at it like that, it is not too tough a run. If we do manage to get some points from these games then it puts you in a stronger position in the month after.”

Posh boss Darren Ferguson was left to rue his side’s poor start but praised his players for sticking to the task.

Toney’s goal was his 17th of the season and, with the 23-year-old at the top of the League One scoring charts, Ferguson knows the club may struggle to hold onto their prize asset.

Burnley are among the clubs to have been linked with a move for the former Newcastle forward.

Ferguson said: “He’s a top, top striker, he’s a great lad, he can get goals, he’s a real handful in the air as well.

“He didn’t look out of place, I thought he put another good performance in. Our main focus in this window is to make sure we keep him if we can, because there’s a lot of clubs looking at him for obvious reasons.”