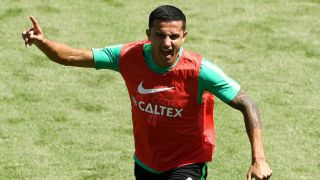 He could make his final Australia appearance on Tuesday but Tim Cahill still has something to offer the Socceroos, says Mark Bosnich.

Russia 2018 marks Cahill's fourth World Cup, although he was left on the bench by head coach Bert van Marwijk for both of their first two Group C fixtures against France and Denmark.

Australia have just one point to show for their efforts so far, their only two goals coming courtesy of penalties from captain Mile Jedinak.

As the Socceroos' record scorer with 50, some fans have been calling for Cahill to be included as they seek a greater cutting edge in their final group meeting with Peru in Sochi.

Australia need a win to have any chance of reaching the last 16 and Bosnich believes the 38-year-old still has something to offer.

"Yes, yes, yes. For me, the other day [against France], we had one sub remaining. When they went 2-1 up, we had one sub to make, 10 minutes to go. 2-1 down. I think that was his time. I think he will definitely play a part," he told Omnisport and Goal.

"There has been far better players. You know like Mark Viduka, Harry Kewell and maybe half a dozen others.

"They were better players than Tim but no one has performed better for the Socceroos than Tim Cahill.

"He has got over 100 caps and his performances for the Socceroos have been the best of anyone over a consistent period. He will forever be in Australia's minds about that.

"The goal against Netherlands in the last World Cup, that was a world-class goal. He will remain in the minds of Australian football followers and sport followers for ever.

"He is our greatest capped outfield player. He will have that and be revered for that and have that significance attached to him forever, or until there’s another one turns up and I don’t think there will be for a very long time."