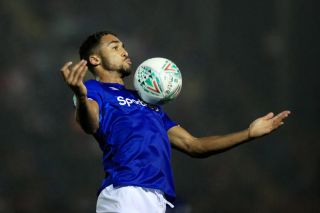 Everton striker Dominic Calvert-Lewin admits it was important for the players to start building bridges with disgruntled fans in the wake of their Merseyside derby humiliation.

A dismal defeat to Liverpool’s second-string in the FA Cup at Anfield last week prompted some supporters to turn up at the club’s training ground ready to remonstrate with the squad.

The 1-0 win over Brighton restored some of the damage but there is still plenty of work to be done, evidenced by the booing of Fabian Delph when he came on after his online spat with a fan earlier in the week.

“It has been a tough week, not only for us but I can only imagine how the fans must feel. We have all felt it as players,” said Calvert-Lewin.

“Personally I can understand the fans’ frustrations and they (the ones who turned up at Finch Farm) wanted to voice their opinion.

“I can only let them know from myself that I know how much it means, we don’t intentionally mean to lose games.

“As a footballer you have to look forward to the next game and as hard as it has been you have to kick on. We couldn’t dwell on it too much.

“We have our personal conversations in the dressing room and it is important that we get our heads together ourselves.

“We speak about where we can do better and what we did wrong and that is all part and parcel of growing as a team.”

The reception at the final whistle was not what could be described as a resounding embrace from the Goodison faithful, more like polite applause which suggested the squad still have some convincing to do.

Asked whether they had a responsibility to pay back the fans, the 22-year-old added: “I think so.

“Before that game we were on a good run, we had got some momentum and turned it around quite drastically in a short space of time.

“We were aware of how big the (Brighton) game was and what losing a game like that could do to the atmosphere so it was important we came and got the win. We could do nothing else but win.”