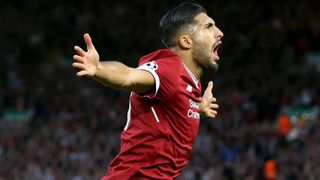 Emre Can has told his Liverpool team-mates that they will need to rough Manchester United up with "hard tackles" if they are to prevail in Saturday's huge Premier League clash.

Liverpool have endured a mixed start to the season, impressing at times going forward but leaving a lot to be desired in defence.

Creating chances has not been a problem, though their wastefulness has come back to bite them on numerous occasions, such as their Champions League draws with Sevilla and Spartak Moscow, as well as their most recent domestic outing – a 1-1 result at Newcastle United.

Can hopes things will be different in what is always a fiercely contested match and believes they have to approach the match in an aggressive manner, particularly against a side who have made a brilliant start to the season.

"It's for Liverpool the city, the fans and for us," Can told Liverpool's official website.

"It will be a very, very tough game because Manchester United have done very well this season so far. But we know we are strong too and we are really looking forward to the game.

"We have to be hard in the tackles, we have to try to dominate the game and score the goals when we create chances. We will see what happens.

Liverpool went into the international break in poor form, drawing four and winning just one of their previous seven matches across all competitions.

That left Can of the opinion that the international break may have actually been a good thing for the Reds.

Back from international duty October 12, 2017

"The last few weeks before the international break were not the best for us because we didn't get the results we wanted. But it was not that bad – we played good football and in most of the games we dominated, but couldn't score.

"For everybody, it was not an easy time before the international break. But we have to all stick together and try to give our best on the pitch – then we will come back to winning ways.

"It's just a small step, I think. We try, we play well and we create very good chances. We have to score the goals and if we do, we'll be back on track."