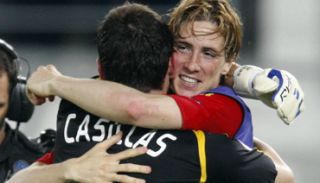 The list will be cut back to 23 after the final round of La Liga matches next weekend.

Real Madrid's Casillas, who captained the team to success at Euros 2008 and 2012, and the 2010 World Cup finals, returns to the side as expected despite having barely played for his club since breaking a finger in January.

The popular 32-year-old was left on the substitutes' bench when he recovered from injury as departing Real coach Jose Mourinho preferred Diego Lopez as his number one during their run into the end of the season.

"Iker had a small injury," Del Bosque told a news conference. "I don't think it's a problem he hasn't played for a few months. He has been training and is in good condition."

Along with Casillas, Torres and Bayern Munich midfielder Javi Martinez were omitted from Spain's last World Cup qualifier against France in March.

Since then Torres has helped Chelsea to win the Europa League and Martinez was a central figure in Bayern's Champions League final victory over Borussia Dortmund.

"When Torres and Martinez didn't come before it was because we didn't think the moment was right. Now it is the opposite," Del Bosque added. "

"They are both in good form."

There have been fitness question marks over midfield regulars such as Xavi, Xabi Alonso and Sergio Busquets, who have looked jaded for their clubs of late, but Del Bosque highlighted the desire the players still had to be a part of the team.

"Everyone wants to come," he said. "No one has said 'I am tired'. The desire to go to a great event is still in tact. We only want people who are completely committed to the national team."

One major absentee in Brazil will be inspirational defender Carles Puyol, 35, who has not returned to play for Barca since having knee surgery in March.

The world and European champions have two friendlies in the United States before heading to Brazil, against Haiti in Miami on June 8 and Ireland in New York three days later.

For the Confederations Cup, Spain have been drawn in Group B with Uruguay, Tahiti and Nigeria and they open the tournament in Recife on June 16 against the 2011 Copa America winners.

The eight-nation warm up event for next year's World Cup runs from June 15 to 30.