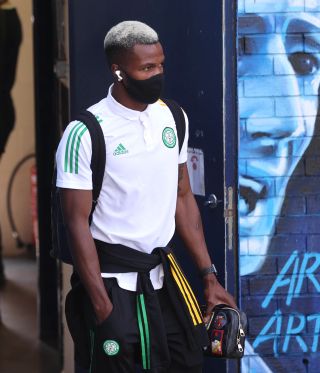 Sanctions for Scottish players who breach coronavirus protocols are set to target individuals – and could be aimed at the Celtic and Aberdeen players who broke rules.

The Scottish football authorities will unveil new enforcement rules on Friday and have signalled they will “encompass recent breaches”.

Clubs outside the Scottish Premiership have also been told they cannot yet return to training – relegated Hearts had already done so.

The Joint Response Group has acted following demands by the Scottish Government to instigate penalties for breaches of health and safety guidelines.

First Minister Nicola Sturgeon handed Scottish football a “yellow card” on Tuesday after it emerged Celtic left-back Boli Bolingoli had travelled to Spain and failed to quarantine days before playing against Kilmarnock.

That came after two Aberdeen players caught Covid-19 and a further six were instructed to self-isolate following a night out.

The indiscretions led to four Scottish Premiership matches being postponed and both clubs opened internal disciplinary proceedings while Bolingoli received a police fine, but no punishments were open to the league or governing body.

A statement from the Joint Response Group read: “The JRG has worked to ensure that existing rules will be strengthened to include the provision of sanctions for players who do not adhere to Covid-specific football protocols or government public health guidelines.

“This will encompass recent breaches and further details will be provided tomorrow (Friday).”

The Scottish Football Association has also agreed that the return to training of all clubs outside the Premiership will be delayed until August 24 at the earliest, pending updated government guidance next Thursday.

However, controversy has broken out after Hearts were told they must stop training.

The Edinburgh club criticised the decision, saying that measures such as testing and bringing players and staff back from furlough ahead of the original agreed date for a return to training would leave them out of pocket if they could not continue.

“Suffice to say that at a time when every football club in the land is managing its costs as tightly as possible, we have incurred significant ‘unnecessary’ costs,” read a statement.

“We have done nothing wrong and yet, once again, we are being disproportionately disadvantaged by a decision which has been described as ‘the fairest’.

“We should not forget that this situation has come about, not because of Covid-19, but because of behavioural issues, not by our employees but by those of other clubs.

“This delay reflects a lack of confidence that certain clubs will be able to comply and meet the required protocols. How can it possibly be ‘fair’ that we should be penalised?”

Scotland’s national clinical director, Jason Leitch, later told BBC Radio Scotland that his understanding was that Hearts would not have to stop and that the decision came from the Scottish Professional Football League.

In response, a JRG spokesperson told the PA news agency: “The pause on all football training beneath Premiership and including all adult football over-18 was part of the agreement with Scottish Government that culminated in today’s range of measures being announced and the majority of this week’s games going ahead as scheduled.”

The delay is to ensure that all clubs are complying with protocols, social distancing, testing and hygiene measures, and that all players and club staff are fully aware of the latest government guidance.

The Betfred Cup group stages are due to start on October 6, with the lower-league season kicking off 11 days later.

Players will be given clear instructions on what is and is not allowed via a video message from Professor Leitch, and public health messages will be displayed in grounds.

SFA president Rod Petrie said:  “The message from First Minister could not have been clearer. The JRG must now ensure that the planned resumption of football beyond the Scottish Premiership is done in a controlled manner with the strictest adherence to protocols and guidelines.

“The pause on the return to training for the professional game outwith the Scottish Premiership will not impact on the proposed start dates of the respective league competitions but will give sufficient time to reinforce protocols, educate players and make sure of the ability of clubs in the lower divisions to conform.”