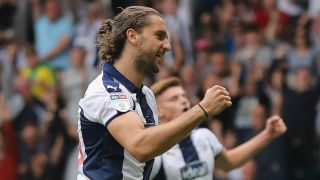 Darren Moore's Baggies, relegated from the Premier League last season, looked very much like promotion material with a sparkling thumping of a lacklustre QPR side at The Hawthorns.

Bielsa, meanwhile, made history as the first man to win each of his first four competitive matches in charge of Leeds courtesy of a commanding victory over Rotherham United.

Both clubs, however, are still chasing Tony Pulis' Boro, who have strung together three wins on the spin following an accomplished display away to Bristol City.

West Brom are emerging as must-see entertainers as they hit QPR for seven, adding to last weekend's rollercoaster 4-3 win at Norwich City.

The visitors were looking to register their first point of the season and looked in good shape to do just that when Joel Lynch cancelled out Matt Phillips' opener by turning home a free-kick, ensuring the scores were level at the break.

But fleeting joy quickly turned to horror for Steve McClaren, who watched his team ship six goals after the interval.

Kieran Gibbs started the carnage before Jay Rodriguez netted two penalties either side of a close-range Dwight Gayle finish, with Phillips completing his brace in the 88th minute.

Hal Robson-Kanu chimed in with a seventh in stoppage time as Moore's men moved into third ahead of Aston Villa, who were held to a 1-1 away draw by a 10-man Ipswich Town.

There was a similar sense of excitement over at Elland Road, where Leeds overcame a plucky Rotherham 2-0 to make it three wins from three in the league.

Luke Ayling broke the deadlock with a header in the 49th minute and Bielsa's perfect start was cemented thanks to Kemar Roofe's third goal in two outings, the striker picking out the far corner 19 minutes from time.

The Whites, though, must be content with staying second as they remain a point shy of a Boro side who eased to a 2-0 victory at Bristol City.

Martin Braithwaite and Britt Assombalonga struck inside the opening 32 minutes to keep Pulis' team top of the pile, albeit having played a game more than their nearest rivals.

Frank Lampard's debut win in charge of Derby County is beginning to seem a distant memory after they left Millwall with a second successive second-tier loss.

Beaten 4-1 by Leeds last weekend, the Rams started in much the same manner at The Den, falling two goals behind in the first 20 minutes.

Though substitute David Nugent drove Derby back into the match in the 73rd minute, the early efforts from Lee Gregory and Shaun Williams proved enough for the Lions to go ninth.

Neil Harris' charges are one point off both Sheffield United - 2-1 victors against Norwich City thanks to Billy Sharp's 93rd-minute header - and Nottingham Forest, who salvaged a 2-2 draw at Wigan Athletic courtesy of Hillel Soudani's last-gasp equaliser.