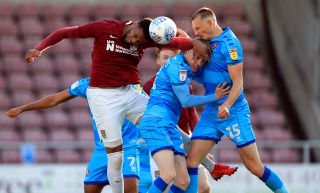 Cheltenham took a big step towards the League Two play-off final with a 2-0 victory over Northampton in the semi-final first leg at Sixfields.

The visitors edged the first half and led at the break thanks to Charlie Raglan’s header before Conor Thomas struck late on to leave the Cobblers with a mountain to climb.

The home side had enough chances to at least draw but they were repeatedly thwarted by Cheltenham’s outstanding goalkeeper Owen Evans, whose early penalty save from Ryan Watson could well prove to be the tie’s defining moment.

The two sides will face each other again in Monday’s return leg at Whaddon Road with the winners taking on either Colchester or Exeter at Wembley on June 29.

As with Wednesday’s Premier League fixtures, players, staff and officials all took a knee before kick-off to show their support for the Black Lives Matter movement.

There was a lengthy stoppage just 10 minutes in when linesman Darren Drysdale sustained an injury and had to be replaced by the fourth official.

Northampton made the better start and they were given a golden opportunity to hit the front when Michael Harriman was tripped by Ryan Broom inside the box, but Watson’s penalty was well saved by Evans.

Cheltenham threatened from set-pieces and that was underlined with the opening goal after 27 minutes. Jake Doyle-Hayes delivered a corner from the left and Raglan was unmarked to head past Steve Arnold.

The visitors then took a stranglehold as Reuben Reid had a shot saved by Arnold and Tom Nichols curled over from the edge of the box.

Cheltenham were living up to their impressive defensive record at the other end, although they needed the excellent Evans to preserve their lead as he saved from both Vadaine Oliver and James Olayinka late in the first half.

Evans continued to be Northampton’s nemesis in the second half as he smothered at the feet of Oliver just two minutes in.

Reid’s well-struck shot was tipped over by Arnold at the other end but Northampton continued to press through Olayinka, whose shot whistled just over.

But the home side’s threat fizzled out in the closing stages and they were hit by the sucker-punch with just three minutes to go when they failed to clear their lines and a scramble in the box led to Thomas smashing home, handing Cheltenham a significant lead ahead of Monday’s second leg.