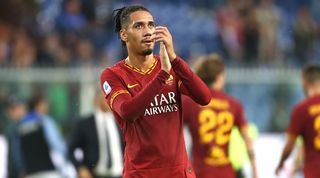 The England international penned a year-long loan deal with the Serie A side in the summer after falling out of favour at Old Trafford.

Smalling has made a strong start at his new club, putting in some eye-catching performances in five appearances between Serie A and the Europa League.

Gianluca Di Marzio reports that the 29-year-old has made such a good impression that the Italians are already at work trying to seal a permanent move next summer.

According to the report, the first meeting between Roma and United could take place in the next few weeks as they look to find a deal for his sale.

Roma want to organise a deal with plenty of time to spare in the hope of getting a good deal from the Premier League giants.

Smalling made 323 appearances for United after joining from Fulham in 2010.

He was still regularly involved last season, despite suffering from injury problems, making 34 appearances in all competitions.

But he was snapped up by Roma in the summer, joining on-loan Arsenal midfielder Henrikh Mkhitaryan at the club.

Smalling could soon be joined by another familiar face after reports emerged on Friday claiming that Jack Rodwell is set to be offered a short-term deal at the capital club.

An injury crisis has decimated coach Paulo Fonseca’s first-team options and the former Manchester City and Sunderland man has been approached as one of the more attractive midfield options on the free agent market.

Roma are currently sixth in Serie A, with 13 points after eight games.

ARSEBLOG Talented Nicolas Pepe needs time to shine at Arsenal – like Bergkamp, Henry and Pires before him