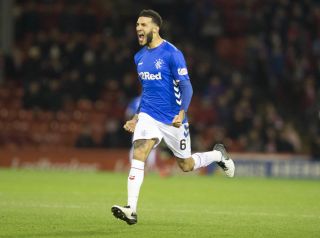 The Light Blues set up a Europa League last-16 date with Bayer Leverkusen after claiming victory in Portugal on Wednesday.

That impressive triumph over the competition’s top scorers has also left defender Goldson with a deep sense of frustration after seeing Gers’ title bid collapse.

However, the former Brighton centre-back reckons his side can rediscover an even keel on the domestic front if they take their continental form into Saturday’s William Hill Scottish Cup clash with Hearts.

“We’ve got a massive game now on Saturday and we need to advance in the cup, so we’ll go to Tynecastle full of confidence,” said Goldson, who performed heroically alongside European rookie George Edmundson as Rangers became the first team to beat Ruben Amorim’s team home and away this season.

“We know it will be a tough game but hopefully the confidence from Braga can give us the spur we need.

“Braga have shown so far in the Europa League just how good they are. At Ibrox they showed how dangerous they can be but I thought our game plan worked down to a T.

“We know how important Saturday’s game is and we’ve spoken about it since the draw happened.

“We know what happened the last time we went to Tynecastle so we need to perform like we did on Wednesday night and I’m sure everything will be fine.”

In Europe this term, Gerrard’s men have hit the heights against the likes of Legia Warsaw, Feyenoord, Porto and now their Portuguese neighbours Braga.

Yet their Ladbrokes Premiership campaign has slumped since Christmas on the back of disastrous results against the Jambos, Aberdeen, Kilmarnock and most recently St Johnstone.

The 2-2 draw with Tommy Wright’s team – which came just three days before their stunning win at the Estadio Municipal – killed off any lingering hopes of a championship rescue mission and sparked fierce criticism from pundits and supporters.

Goldson has paid no attention to the flak but admits those ups and downs have been maddening.

“Wednesday’s win means a lot,” said Goldson. “We knew it was a big achievement. We knew it would be tough but we dug deep and managed to get through.

“I wouldn’t say the criticism fires us up because we don’t want to get the stick in the first place.

“We want to perform in every single game and we know that in certain games things haven’t been good enough.

“To a man we were brilliant on Wednesday.

“It just shows what a good side we are – but we need to show that on a consistent basis week-in, week-out playing for a club like this.

“We need to win games of football and not just one in every two. It has to be every single game.

“But take nothing away from Wednesday night. It was a huge performance and a huge achievement for this club.

“Yeah we spoke about (our swings in form) in the changing room after the game.

“When we work like we did on Wednesday for each other and every player puts in 100 per cent then those are the type of results we get.

“We’ve shown that all year in Europe so it’s just a shame that we’ve let ourselves down since Christmas in that department.”