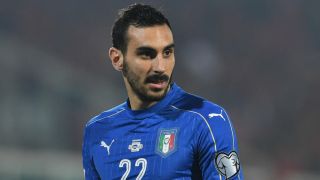 New Chelsea signing Davide Zappacosta is ready to meet the challenge of playing for a top club, Antonio Conte has said.

The Italy international arrived from Torino on England's transfer deadline day for a fee in the region of £27million.

The 25-year-old could make his debut on Saturday, when the Premier League champions travel to Leicester City looking for a third win in a row since their shock opening-day loss to Burnley.

And Conte believes Zappacosta has the right mindset to hit the ground running for the club.

"Davide is a good player, a young player and, for this reason, he has a lot of space to improve," the Chelsea boss said.

"He makes good runs during the game, has good quality. He's a wing-back and usually prefers to play on the right, but can play on the left. He is ready. You'll see, very soon, his performance.

"For Davide it's a great chance. He arrives in a great club. It's important to go into this club with the right mentality. It's not easy to play for a great club, above all when, previously, you didn't.

"But don't forget Torino are a good team with a great history, in the past. I know that, also, in Turin there is good pressure. But to play in another country, another type of football, it's not easy for him."

Conte expects Zappacosta to have few problems adapting to his tactics, having coached the full-back at international level.

"For this reason, it's more simple for him to adapt himself to our style of football."