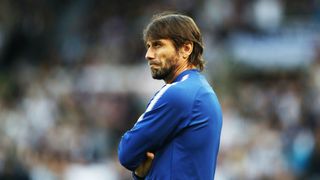 Antonio Conte says Chelsea do not owe their supporters in the FA Cup final, despite a poor Premier League title defence, instead claiming his side have worked harder this season than last.

Chelsea meekly surrendered their crown to Manchester City and could not even qualify for the Champions League, ending the league season with a dismal 3-0 defeat at Newcastle United.

But Conte does not believe that has been due to a lack of effort, and would consider a cup final win against Manchester United a fine end to the season without needing to consider repaying the fans.

"To finish the season with the possibility to play at Wembley, play the final for the second time in a row, is a great achievement," he told a news conference.

"I don't know [if Chelsea owe the fans]. I can tell you that this season we have worked harder than last season - I'm sure about this. That's enough for myself."

Conte was in typically guarded form when it came to discussion of his future, insisting his focus is solely on Saturday's match.

He repeated: "I can tell you that this will be my last match in this season - for me and for my players - and then I have a contract and I am committed to the club.

Conte says we have the possibility to win another trophy and it will be a great achievement for the players, fans and club if we can secure the FA Cup. May 18, 2018

"We must be focused on the game. This game is very important after a difficult season, to finish the season with a trophy. We are focused on this target, to try to do everything to win the game."

And the Chelsea boss would not offer an assessment of his side's season either, saying it is not for him to decide if silverware would rescue the campaign.

"It's important to think together about our season, about last season when we won the league, about this season and the possibility to win another trophy. For sure, it would be a great achievement for the team, for the players, for the club, for ours fans.

"In my career, I have played another cup final in Italy, in my first season with Juventus, and we lost. Last season we lost against Arsenal. But I repeat: we win and lose together - I don't win and I don't lose."