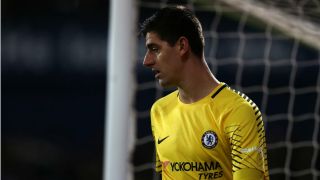 Chelsea goalkeeper Thibaut Courtois will wait until after the World Cup to decide his future, but admitted he wanted to spend more time with his children in Madrid.

Courtois, who is contracted at Stamford Bridge until 2019, is linked with a move to European champions Real Madrid.

The former Atletico shot-stopper said being closer to his children in Madrid was crucial, although any decisions over his future will not be made until Belgium's World Cup campaign ends.

"I love living in London. Madrid and London are great," Courtois said, via Sport, after his nation's last-16 win over Japan on Monday.

"The only thing is that my children live in Madrid. I would like them to be close.

"That doesn't mean I'm going to come back, but for me they are very important and I'm going to do something to see them more."

Chelsea signed Courtois from Genk in 2011, but sent the goalkeeper out on loan to Atletico for three seasons.

While he wants to sort out his future, the 26-year-old said the World Cup was his focus.

"I'm not going to talk about that now. I just said that I'll see everything after the World Cup," Courtois said.

"The most important thing is my children and I'll decide what's best for me in everything."