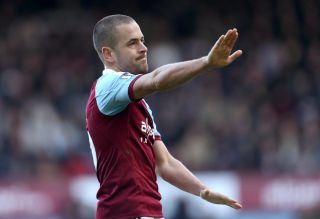 Joe Cole is being considered for a return to West Ham in a coaching role.

The 38-year-old, who began his career at the Hammers before moving on to Chelsea where he won three Premier League titles and two FA Cups, is currently working as a television pundit.

David Moyes has been unable to bring Stuart Pearce, who was on his coaching team during his previous spell in charge, back to the club.

But former England midfielder Cole has expressed an interest in joining the backroom staff at his old club.

Moyes said: “We’re looking at it. I don’t think we will have it all together just now, there are several people looking for a position and others who we are looking at.

“We have been extremely busy in the last few days. Joe Cole is one of a lot of people who we have talked about.”

Randolph’s move has been delayed due to an injury with Moyes adding: “At the moment, he is carrying a bit of an injury he’s had for several weeks and we have to make sure it has healed.

“That’s where the deal is and I’m very hopeful.”

Fernandes has reportedly agreed an 18-month loan switch, but Moyes said: “I couldn’t tell you since I have come straight from training to the press conference.

“More importantly, he’s a young player for the future and he has a good pedigree.”

The Hammers have won back-to-back matches, against Bournemouth and Gillingham, since Moyes replaced Manuel Pellegrini as manager.

But Sheffield United are likely to provide a far tougher test when West Ham head to Bramall Lane on Friday night.

“First and foremost I am expecting a very difficult game,” said Moyes.

“We have just started to gain a bit of confidence from our results and I hope we can show that in our performance.

“We did a really professional job at Gillingham in the FA Cup to get through and played well against Bournemouth, scoring four goals and not conceding any, which is important.

“But we will be put to another test against Sheffield United. Their manager and team have done very well, so it’ll be tough.”