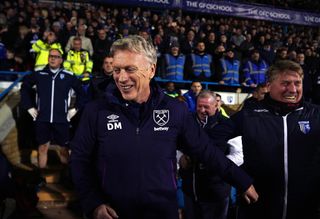 David Moyes is still waiting to hear whether West Ham can agree a deal for Benfica midfielder Gedson Fernandes.

The Hammers reportedly face competition from Everton to land the 20-year-old Portugal international on loan.

Asked if the deal was close to being completed, Moyes said: “I can’t tell you. Your question is very straight and I can’t say if it will happen.

“We would like to add to the squad but we need to get the right players.”

Hammers boss Moyes could also be in the market for a right-back after Ryan Fredericks was injured during the 2-0 FA Cup win at Gillingham.

Fredericks pulled up mid-sprint clutching his hamstring, with the club now waiting to discover the extent of the injury.

“I didn’t like the look of it,” admitted Moyes. “I couldn’t tell you if it is a strain or a bit more, it looked worse to me.”

Pablo Zabaleta replaced Fredericks and scored West Ham’s opening goal, his first for the club, but the Argentinian turns 35 next week and will struggle to play week in, week out.

“January is a big month for us, we have a couple of midweek fixtures and a really big rearranged one against Liverpool,” said Moyes.

“Obviously getting through was key and I really thought they stuck at it.

“That’s two clean sheets and six goals scored in two games, and it’s feeling like there is a bit of a spirit growing among the players.

“Obviously I’ve only been here a week and we’ve got two wins, so it’s been a great start.”

The Spaniard told West Ham TV: “We need to continue to progress in this competition and the Premier League.

“We need to continue playing as we did, to take the form and the coach’s concepts, and enjoy it.”