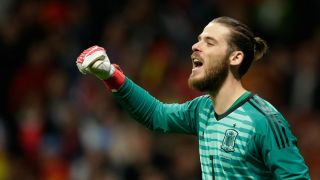 David de Gea feels Spain are in "great shape" to compete for the World Cup title, with his country travelling to Russia full of ambition.

Spain demolished Argentina 6-1 in March and are considered one of the leading contenders for glory in Russia, coach Julen Lopetegui able to select from a deep well of talent.

De Gea was in Spain's squad for the last World Cup but did not get on the pitch, with Iker Casillas and Pepe Reina taking the gloves during a shock group-stage exit.

"We are in great shape. We've got a great squad and we are going there with a lot of hope and desire and we are really excited about what's ahead," the Manchester United goalkeeper said to Sky Sports.

"We've got a strong squad and there's a lot of ambition there. We had a great qualifying campaign, but now it's the nice bit, the final stages of the tournament.

"We've got to go there and try and play our own style of football, try and get victories in the group stage and then go game by game. It will be an unforgettable experience and I'm sure everyone in the squad will be giving 100 per cent to try and win the World Cup one more time for Spain."

De Gea expects to see England among Spain's challengers for glory, claiming Gareth Southgate's side have a chance of upsetting the odds and going deep into the tournament.

"Why not? Every national side is there for a reason," De Gea said when asked if England could be contenders. "They have come through the qualifying and they are there because they deserve to be there. Everyone is capable of winning it.

"You always get a surprise package in every tournament, so why not England? I'm sure everyone will be doing their best and England will be no exception."