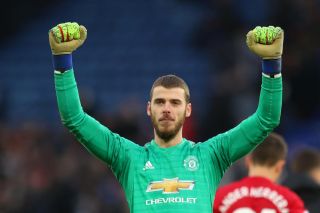 Manchester United have "a team to win something" according to goalkeeper David de Gea, who said his team-mates are raring to take on the challenge posed by Paris Saint-Germain in the Champions League.

The French champions travel to Old Trafford on Tuesday to face a United side unbeaten in their 11 games in all competitions under Ole Gunnar Solskjaer.

Brazilian forward Neymar will miss the game with a foot injury and Edinson Cavani is also a major doubt but De Gea insisted the visitors would still be favourites.

He told Telefoot: "This will be a very intense game. They're the favourites, but we'll be very motivated.

"We all want to play this game and win it. It will be very tight!"

De Gea picked out Paul Pogba and Anthony Martial as key players in United's revival this season, and backed the Red Devils to challenge for silverware as they compete in the FA Cup, Premier League and Champions League over the next three months.

Pogba scored twice in United's 3-0 victory over Fulham at Craven Cottage, netting either side of Martial's ninth league goal of the season.

"We have a team to win something," said De Gea.

"Paul Pogba is fundamental to us. Anthony Martial is unstoppable and we're all working to go to the finals."