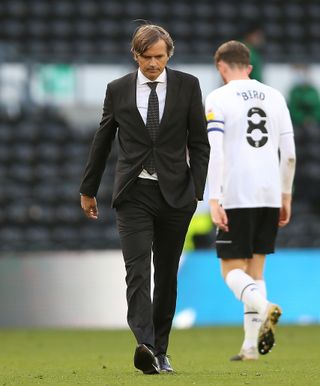 Derby manager Phillip Cocu thought his team were ‘handed’ a rough deal when an added-time penalty gave Preston a 2-1 win at Pride Park.

Lee Buchanan was adjudged to have handled a cross at the end of the Carabao Cup second round tie but Cocu insisted it struck the left-back in the face.

Preston had been the better side in the first half with Sean Maguire wasting a good chance before Jayden Stockley fired over.

Josh Harrop was denied by Kelle Roos but it was Derby who went ahead six minutes into the second half when Jason Knight scored after his first effort was blocked.

The Rams were down to 10 men four minutes later when Mike te Wierik pulled over Maguire as the striker was going clear and was shown a straight red card.

It changed the tie and Preston’s substitutes won it, with Tom Barkhuizen smashing in an unstoppable 20-yard  shot in the 79th minute.

With the game heading for a penalty shoot out, referee Andy Davies pointed to the spot in stoppage time when a cross struck Buchanan and Daniel Johnson sent Roos the wrong way to set up a third round home tie against Brighton or Portsmouth.

But Cocu clearly felt the officials got it wrong, saying: “It was not handball, it hit him in the face. He said it himself after the game, that’s why he was so angry.

“I only saw it on the iPad so it’s a small image but his arm is behind him so even if it touched his shoulder it’s not a penalty. So if you’re not sure, and then in the last minute…I really lose my head completely.

“We all make mistakes, I know, but it’s a crucial mistake I can’t give too many comments and have to be careful with my words but let’s say I don’t have a positive feeling.

“The players at least deserved to have a shot at winning it by penalties because I think we played a really good game.”

Preston manager Alex Neil said: “It thought it was a good night, we played well and deserved to win the game.

“We were the better side right the way through and the biggest disappointment was with their one attack they scored, which for me was completely against the run of play.

“At that point it could have been quite easy for heads to go down and mope a little bit but our reaction was excellent, we got on with it and rolled our sleeves up.

“The lads didn’t think falling behind was justified and I agreed with that, they did something about it.”