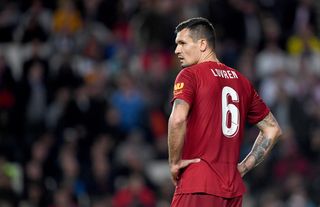 Liverpool defender Dejan Lovren remains a doubt for Sunday’s visit of Aston Villa after missing Thursday’s defeat to Manchester City with a knock.

With Joel Matip ruled out for the remainder of the season with a foot injury it currently leaves manager Jurgen Klopp with just two fit centre-backs in Virgil Van Dijk and Joe Gomez.

Midfielder Xherdan Shaqiri remains absent, having not played since January.

Matt Targett is out for Aston Villa after picking up a hamstring injury in last week’s 1-0 home defeat to Wolves.

Ezri Konsa is battling a foot injury after suffering a knock against Wolves and has not trained this week ahead of the trip to Anfield, although boss Dean Smith is hopeful he will recover in time.

Tom Heaton and Wesley (both knee) remain out and Borja Baston has left the club after his short-term contract expired with Villa opting not to extend the striker’s deal.