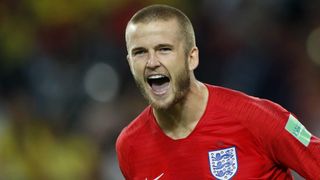 Eric Dier has invited England fans to head out to Russia and support the team ahead of their World Cup semi-final with Croatia on Wednesday.

The Tottenham midfielder was the hero in the penalty shoot-out win over Colombia in the last 16, and featured as a late substitute in Samara on Saturday, as the Three Lions booked their last-four berth with a comfortable 2-0 triumph over Sweden.

It was estimated there were only around 3,000 England supporters in the ground but Dier encouraged any fan thinking about travelling to book their ticket and get on a plane to Moscow.

"Yes, I can only recommend for England fans to come. It has been fantastic so far," he told reporters.

"The tournament and the organisation and everything about it has been great.

While manager Gareth Southgate and the rest of the squad have projected an aura of calm amid England's run to the semis, the nation has become whipped up into a frenzy of fantasy allied with the idea that 'football's coming home'.

"Being away from it makes it quite easy," said Dier. "Obviously, if you are in England, it is crazy everywhere but being here we are quite distant from it.

"We have to stay focused and we have done well with that up until now. We hope to keep doing that.

"It means everything to create our own history. We keep doing that game after game. We keep going and aim to try and get as far as we can.

"Obviously a team's quality can always improve and we will try to keep improving. I think we believe that we can improve a lot but we will try to do that. I think we have had the right attitude and mentality and willingness to fight from the beginning."